It is a robot whose behaviour is fully controlled by Sitecore xDB!
Why? To show the power of Sitecore’s marketing suite. To prove that Sitecore’s omni-channel capabilities go beyond existing channels. And to discover the boundaries of this technology. Experiment with the new Microsoft Cognitive Services. And just because it’s awesome! 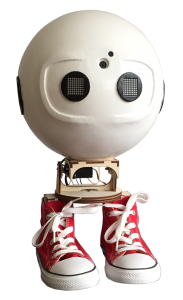 Besides the cool appearance of the robot, Robbie, there’s something in the software Rob and Bas built that is ground breaking and a useful innovation: Robbie can detect and recognize multiple persons within its field of vision, and run multiple xDB sessions simultaneously, being able to interact with multiple individuals at the same time, while personalizing behaviour towards all of them individually. From one device.
In the upcoming months, Rob and Bas will release multiple blog posts going deeper into the technology behind this project. They will demo Robbie on other events as well, and eventually release all code that drives this awesome project!
Want to see more? Keep an eye out on the #sugcon Twitter channel or our website, as soon the recordings of this session will be shared!

This site uses Akismet to reduce spam. Learn how your comment data is processed.